The continuing stream of global news of how some celebrity or business had its private data stolen from a cloud such as iCloud, Dropbox, Google Drive, and such, and the unending changes to social network privacy settings that users do not always get any notice about, make one think about their privacy. Now, more than ever, we feel there is a need to protect our digital files and data.

A solution has been found by Jaak Geens (Belgium), an initiator of various pan-European projects and new technology innovator, who has invented a particular system and, with the assistance from Lithuanian professionals, is now building and polishing a platform that enables protection and secure sharing of private data.

From Belgium to Lithuania, to start a business

It all began several years ago, when J. Geens, who had been working with global companies like IBM, Johnson&Johnson, to name a few, for years, was representing businesses in the Baltics. Having decided to start his own business, J. Geens settled in Lithuania, enthralled not only by its nature, but the talent and resolve of young people, their openness to new things and ideas, and the innovation that was taking place here, as well.

J. Geens says that the first thing he did upon arriving in Lithuania, he contacted assoc. prof. dr. Linas Bukauskas, vice-dean of the Mathematics and Informatics Faculty of Vilnius University (VU). They were joined by more people who helped turn ideas into business. That’s how UAB Strategeens was born in Vilnius.

The company engages in business analysis, information technology (IT) services, solutions and consultations, designing 3D and 2D charts, development of online and mobile applications, and so on. One of its clients is Geens, a Belgian non-profit organisation (NPO).

‘The Geens organisation is directly involved in the privacy of digital data and their owners,’ J. Geens says. ‘Under the national Belgian law, it is supervised by the ethics committee; the organisation cannot be bought or sold, and any profit it makes is distributed among its members only.’

Free from ownership, able to maintain an autonomy and focusing on a common positive goal – protection of privacy – NPO Geens and its namesake platform designed to protect private digital data can offer a maximum privacy guarantee to its clients.

‘The Geens data protection platform works on much the same principle, as, say, Dropbox, says Mindaugas Januška, Jaak Geens’s direct partner. ‘Yet there is a tiny difference: only you know the password, and no one else. If you forget the passwords, contrary to many social networks, apps, or platforms, there is no reminder option. That way, you can rest assured that the password will be discovered even by the very team that works on the platform.’

According to J. Geens and M. Januška, Geens is more than just a platform: it is a community. Data stored on the platform can be shared only by other users – members of the community: ‘For example, your doctor has performed tests and needs to give you the results. He can do that digitally, via the Geens platform. Only you and your doctor will be able to see the test results, no one else can access them,’ M. Januška explains.

Another fine point of data protection is the unique code that every file uploaded to the system has. That way, the data are encrypted to be inaccessible by people with whom you do not want to share them.

Strategeens is directly concerned with Geens working free from any interruptions. The team employs many young people, experts in their field, who are supervised by senior professionals, J. Geens and assoc. prof. dr. L. Bukauskas, included. Strategeens works with strategies that are covered by the umbrella of the Geens concept. ‘We not just work for ourselves – we look into the future and note current needs, we create innovative applications for everyone,’ M. Januška maintains. 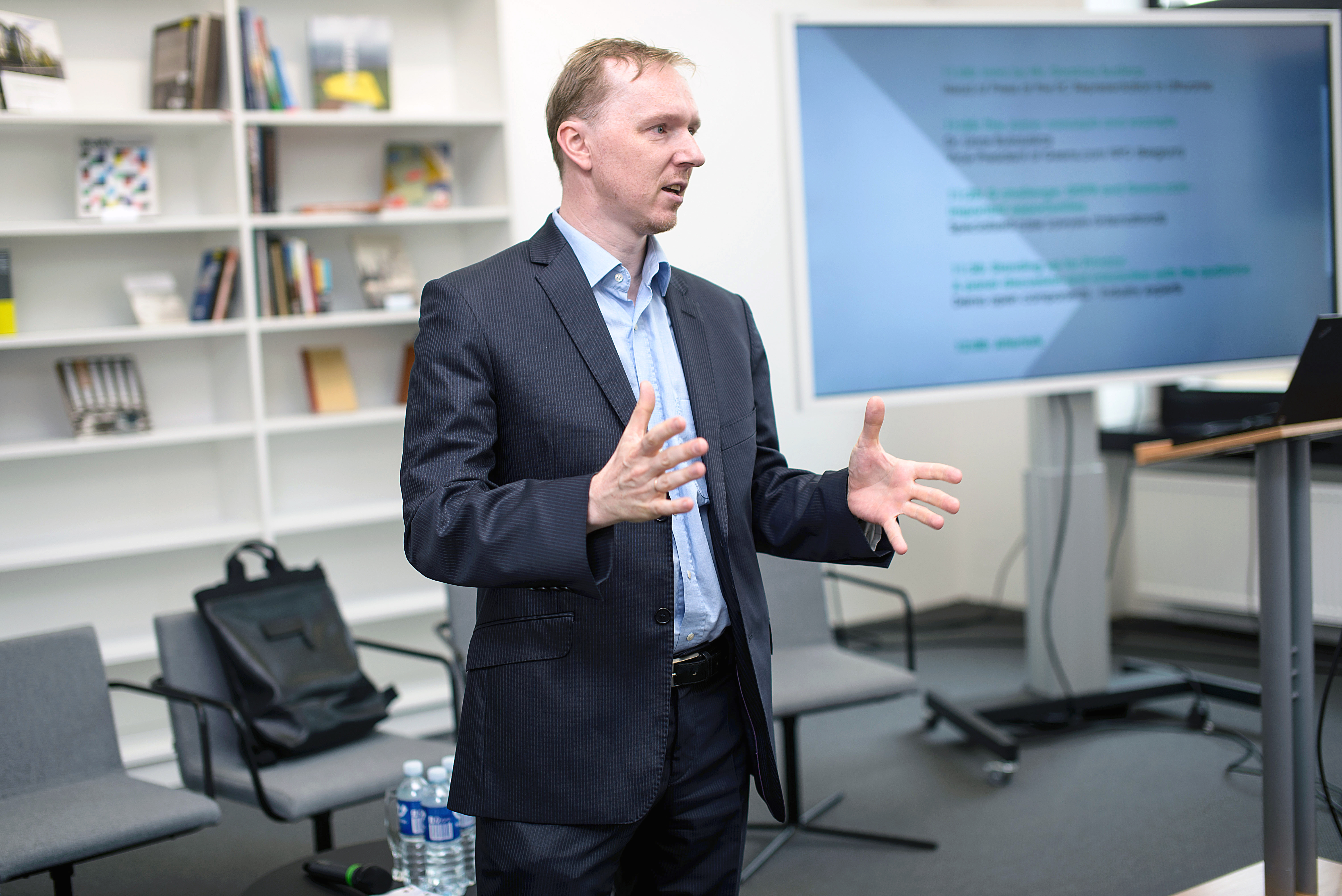 And the applications are many. GeePoll’s demo allows its users to vote anonymously by logging in via the Geens platform (using the same principle as with, say, Google or Facebook logins).

‘After we talked with representatives of different companies, university professors, we found out that employee or student surveys do not mirror the truth. People are simply unwilling to admit certain things, share their views, because even if a survey is labelled private, still there are easy ways to identify the people who answered the questions, making them vulnerable. GeePoll is an absolutely anonymous application; it does not even recognise you for who you are, guaranteeing both completely honest answers to survey questions and the privacy of the person who gave them,’ Linas Makauskas, Process and Development Manager of Strategeens, says.

This application has already drawn serious attention of several high-profile Belgian universities, and Geens users are trying and using the demo of the application for their own needs. J. Geens and L. Makauskas believe that a similar principle could be employed to develop secure online voting platforms to enable voicing opinions at conferences, academic lessons, measuring matters relating to the quality of internal processes of businesses (and of human resources in particular). And these are just several of the numerous examples of fields of application.

NPO Geens has mandated UAB Strategeens, a company incorporated and operating in Lithuania, to implement a project of initial coin offering (ICO). The revenues would be used to continue the research and the development of the components of the Geens ecosystem, achieve the objectives, and live up to the supporters’ expectations with usury. That is why the community is currently looking for investors willing not only to become members of Geens and protect their private data, but to derive direct benefit from it in the future as well.

In Lithuania, the project has huge support from Bank of Lithuania, the VU Faculty of Mathematics and Informatics, the European Commission (EC) mission in Vilnius and its head, Arnoldas Pranckevičius. On a European level, Geens has also merited a tremendous interest through participation in conferences and all kinds of other events, earning the praise from Herman Van Rompuy, the first EC President and former Belgian Prime Minister, and Herman Daems, an economist and professor with Leuven University (Brussels).